Time: Registration begins at 8:00am

Calling all Smith Rock climbers: The 2019 Smith Rock Spring Thing will be held on April 27th, 2019 as volunteers converge to get their hands dirty rehabilitating trails and helping maintain the park. Volunteers will be part of groups that work within different areas of the park helping build trails, restoring existing trails, or improving areas near the base of heavily trafficked climbs.

Smith Rock has become a worldwide destination that is seeing significant increases in visitors each year. If you’ve ever pulled into the parking lot on a nice spring day around 11am, you know what I’m talking about. It has reached a point where local officials have now started drafting a new plan to accommodate visitors while keeping the park home to natural wildlife habitats. The Smith Rock Spring Thing is your chance to give back to help restore and maintain the recreational area.

The annual Smith Rock Spring Thing brings together climbers and those who love Smith Rock to help maintain existing trails and build new trails where they are needed. The single day event is typically made up of hundreds of volunteers that are broken off into smaller teams of roughly ten who then tackle a single project within the park. Volunteers choose the project they will be working on in a first-come, first-serve sign-up process at the registration table in the main parking lot near the visitors center yurt. Parking will be limited so plan to arrive early and carpool if possible. 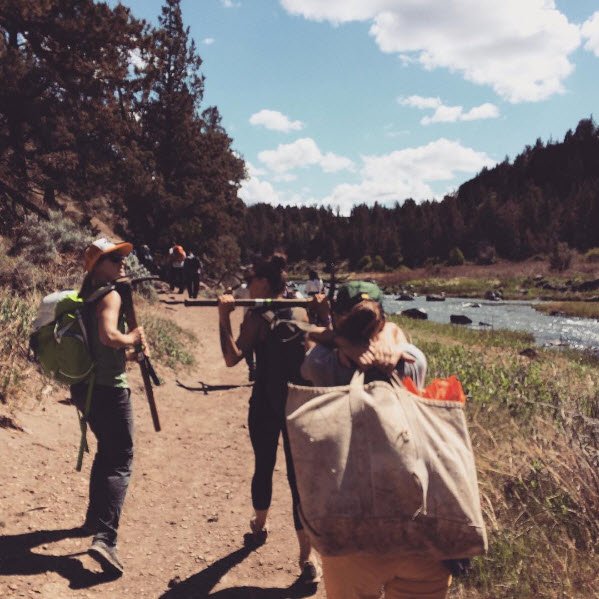 The event organizers provide work gloves, tools, and often times have used vehicles to drop off any heavy lumber or materials needed at each project site. All each volunteer needs to bring is a positive attitude, a willingness to work as a team with others, food and water for the day, and to be in good physical condition depending on the project. Some teams will hike out to the far reaches of the park, while those signing up early will have their pick of closer in projects. Many of the projects do require heavy lifting either by yourself or as part of a team moving boulders, picking up debris, or digging. Instruction will provided by respective project leads who will be in charge of directing teams and providing guidance as needed.

Last year we were part of a team of roughly 12 people that worked on building a proper walk-off trail for climbs topping out on the Smith Rock Group, namely Wherever I May Roam. While there was a faint trail that was established heading off the west side of the formation down to the river, it wasn’t obvious and multiple trails left getting down open to interpretation. This led to climbers and hikers taking different routes and adding to erosion concerns. Our team helped pick up old branches and debris to try and build guard rails of sorts to direct hikers on a single path from top to bottom. In the steeper sections of the trail near the top of the formation we used boulder slings to carry large rocks from the nearby area that were then used to build steps into the trail. We were lucky enough to have been led by a husband and wife duo from the Access Fund who traveled from crag to crag around the United States helping maintain and restore climbing areas.

Typically the event concludes with a volunteer dinner, raffle, and other good times starting around 5pm. Stay tuned for more information as the event nears by following the Smith Rock State Park Facebook page.