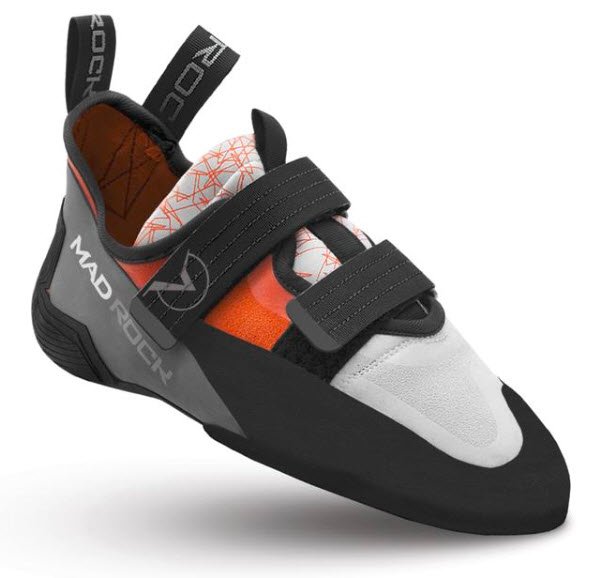 The Mad Rock Flash 2018 has been out for a few years now but I’m constantly surprised at how few people I see wearing them in the gym. They make for a great beginner shoe or a cheap gym shoe you can beat up but still get decent performance out of as an intermediate or even more advanced climber. Lastly the price is spot on for a gym shoe, below most other intro shoes from top brands like La Sportiva or Scarpa.

The Mad Rock Flash 2018 is the next generation of the already successful Flash model. If you’ve read our review of the Mad Rock Flash 2.0, then you know that I was a big fan of the shoe. It was a fairly straight forward shoe that did everything pretty well while still remaining comfortable while not breaking the bank. They were perfect for the gym so you could spare your $180 shoes from the everyday wear and tear. Alas, Mad Rock decided to move away from the old model and try to update an already good shoe. This begs the question: why fix something that isn’t broken?

So what are the new features you ask? Here is the list of how the Flash 2018 differs from the Flash 2.0:

Ok, so that’s the quick and dirty. Read on for the more detailed review after having spent a few weeks rocking the Flash 2018.

The Mad Rock Flash 2018 had all the potential to disappoint. Ie had been wearing the Flash 2.0 for two years and was used to what it offered. Change is hard, but Mad Rock made it easy on me by making an already good shoe better.

The updated Flash 2018 had a noticeably different fit. I ordered a half-size down based on past fit of the 2.0. The first thing I noticed was the tightness in the width of the toe box. While the shoes were understandably snug in length, the outside part of the toe box was very tight and uncomfortable the first time I slipped them on. Luckily, this turned into a good thing over time. After three to four uses, the toe box loosened up while still remaining snug for performance. Unlike the 2.0, the Flash 2018 toe box feels like it does a better job of transferring power from the toe box by not allowing the forefoot to shift or feel like it is swimming in the shoe. This is a much different feel from slippers such as the Mad Rock Remora or Five Ten Anasazi Moccasym, both which have wider and more flexible toe boxes.

While the forefoot of the shoe feels like an upgrade, the heel support and overall suction feel of the shoe lacks in comparison to a higher end shoe. There is a noticeable pocket of air in the arch, but I only felt it on one foot, so maybe it’s a deformity I have. Either way, the shoe suction is not perfect but at the same time what can you expect from a model that comes in under $90 MSRP? Overall, you aren’t compromising much.

It took just a few sessions before the Flash 2018 was broken in. As mentioned earlier, the first time I pulled on the shoe it was very tight and uncomfortable but after a few wears the comfort I was used to from the Flash 2.0 came around. Even sizing down a half-size, I was able to keep the shoes on in between routes or boulder problems. Not sizing down likely results in an even more comfortable shoe for beginners.

It’s too early to tell but if these are anything like other Mad Rock shoes I’ve worn, they’ll do the job for 9-12 months of weekly gym abuse before I trade them in. Added hits of coating on the upper toebox are new additions that are likely to add to the longevity of the shoe. The upper wrap of the foot also helps getting the shoe on more easily and requires less wrenching of the straps to get the shoe snug. It’s not totally uncommon for straps to fail after constantly wrenching on them, so this addition leads us to believe the straps are less likely to fail.

I’m constantly surprised by the performance of the Flash. Sure, they probably aren’t going to be making appearances climbing at the World Cup, but neither am I…or most of you. They are a great gym shoe.

Out of the box the shoe has a nice stiffness while not sacrificing sensitivity. More time is needed to know if the shoes will become overly soft over time. 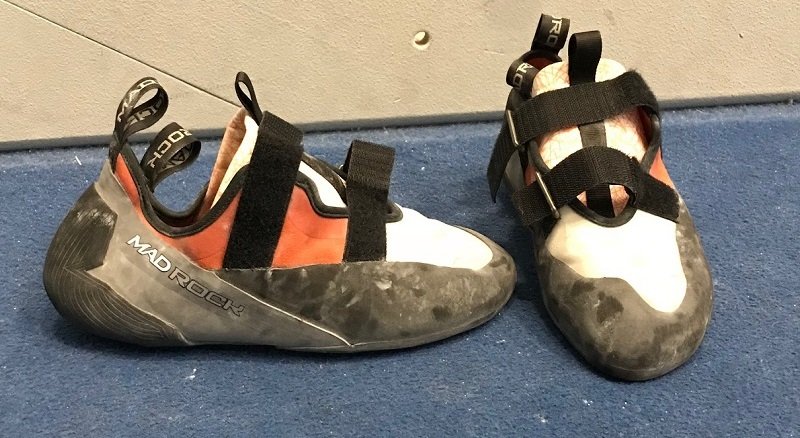 Broken in and happy about the Flash 2018

I don’t think you can buy a better shoes for under $90. Time it right, and you will see the Flash 2018 go on sale for under $70 from a few major retailers. It’s the best deal in town.

The new upper foot wrap that replaced the padding under each side of the straps makes it easier to get the shoe on and strap down snug. Definitely an upgrade from the previous model.

The Not So Good

Too Early To Tell

Besides the fit I mentioned earlier, I can’t find any complaints about the shoe given their price and intended target market – mainly beginners and gym climbers. This may change over time but for the time being everything is peachy.

I typically wear a size 12 running shoe and an 11.5 street shoe. Once again, sizing down a half-size adds a bit more snugness for performance while street size will likely be more comfortable for beginners.

I really liked the Mad Rock Flash 2.0 and was worried Mad Rock was going to ruin a good thing they had going. Luckily Mad Rock took their time and made a good shoe even better.