How My Climbing Partner Convinced Me to Marry Her

There are countless reasons why I love my wife. The day we were engaged at Smith Rock removed any molecular level of doubt that may have existed in my body about spending the rest of our lives together.

For a few weeks leading up to the day I proposed I was trying to plan the perfect engagement scenario. There of course was ring shopping but that seemed like a trivial part of the equation compared to figuring out where and how I would propose. After giving it lots of thought, an upcoming climbing trip to Smith Rock seemed like the perfect option. We were living in Portland at the time and our Smith Rock weekend climbing trips were always the best getaways. The park was our place.

My big plan was to wake up early and hike out to The Wombat in The Marsupials to climb Birds in a Rut. The logic was that we would be out in the far reaches of the park and have the place to ourselves. That way we could enjoy a whole day together by ourselves and I could actually propose without having the entire Morning Glory Wall viewing party privy to our moment. 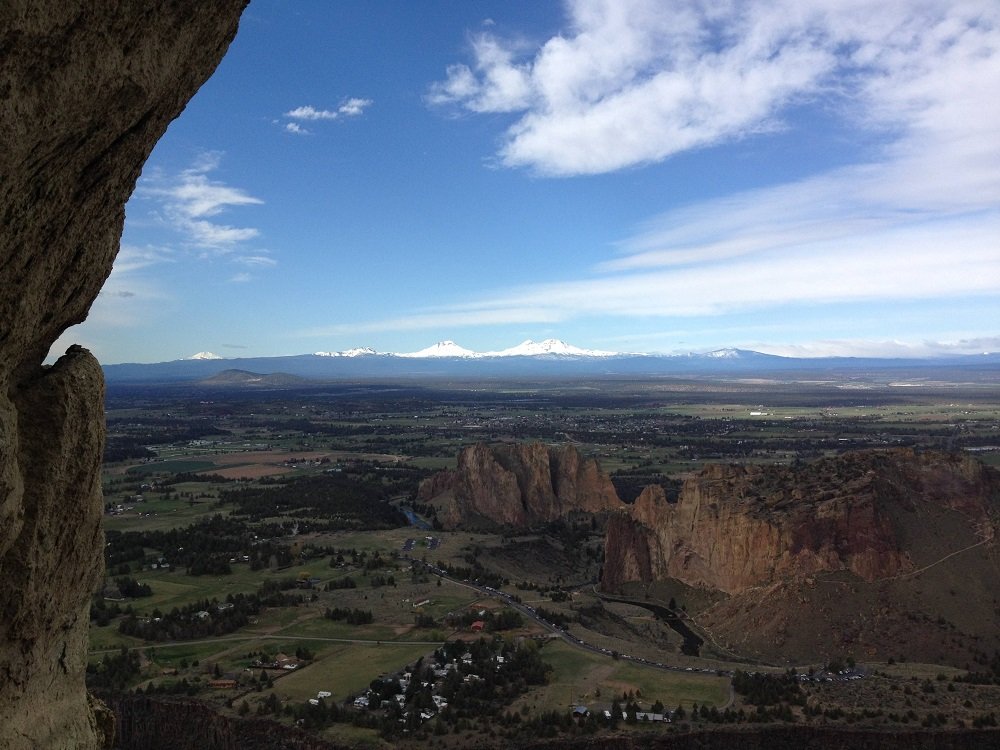 The view from halfway up The Wombat. Not too shabby.

We woke up early as planned, downed a quick and dirty breakfast at the picnic tables outside the park bathrooms in 30 degree temps and started making the hike out (super-romantic). Now if you’ve ever hiked out to The Marsupials then you know that it is a bit of a hike with some elevation gain. It takes about 45 minutes to the base of Koala Rock, and by the time you get there you are usually sweating pretty good regardless of how hot or cold it is outside. Without fail we made it to Koala Rock with a nice lather worked up. Little did we know that the worst was yet to come.

Making the hike up to the base of The Wombat is really more like a crawl. The steep loose rocky trail up the left side of Koala Rock will leave your calves on fire, your heart in your throat, and likely bring you to your hands and knees at some point. The entire way there was never any grumbling from my fiance-to-be about the shitty hike we were suffering through. To make things worse, by the time we reached the base of the climb it was still freezing cold and there was the often dreaded party of three just finishing roping up ahead of us. FUUUUCCCKKKK.

The sun still had a few hours before it was going to rise above the east side of The Wombat, the wind was moving through the base of the crag, and we were sitting like cold lame sweaty ducks waiting for the party of three to get moving. Again, no complaints to be heard when she had all the right in the world to be pissed off at the stupid adventure I was leading. Not ideal, but she was definitely earning major bonus points in my book. 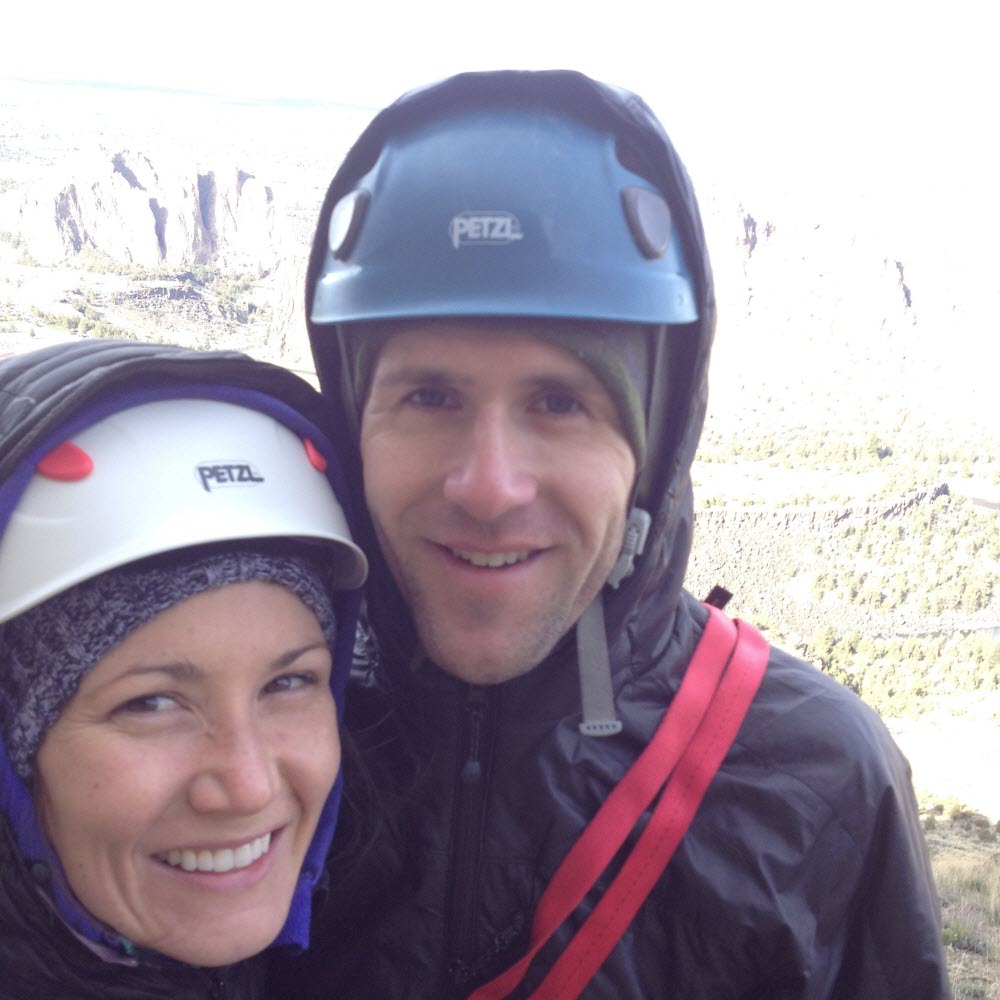 Long story short, we made our way up the climb with numb feet and fingers as we hung out at belay stations waiting for our turn to tackle the upcoming pitches. The whole time I was sure to be extra sweet while trying to reinforce “what a great view of the park” we had and “how fun that last pitch was”. She probably wasn’t buying the garbage I was selling but she sure made it seem like she was while we shivered in a tight huddle close to our bolted belays. We finally topped out the climb and luckily for us the sun had made a full appearance and was warming our bodies as we sat atop of the highest perch in the park. 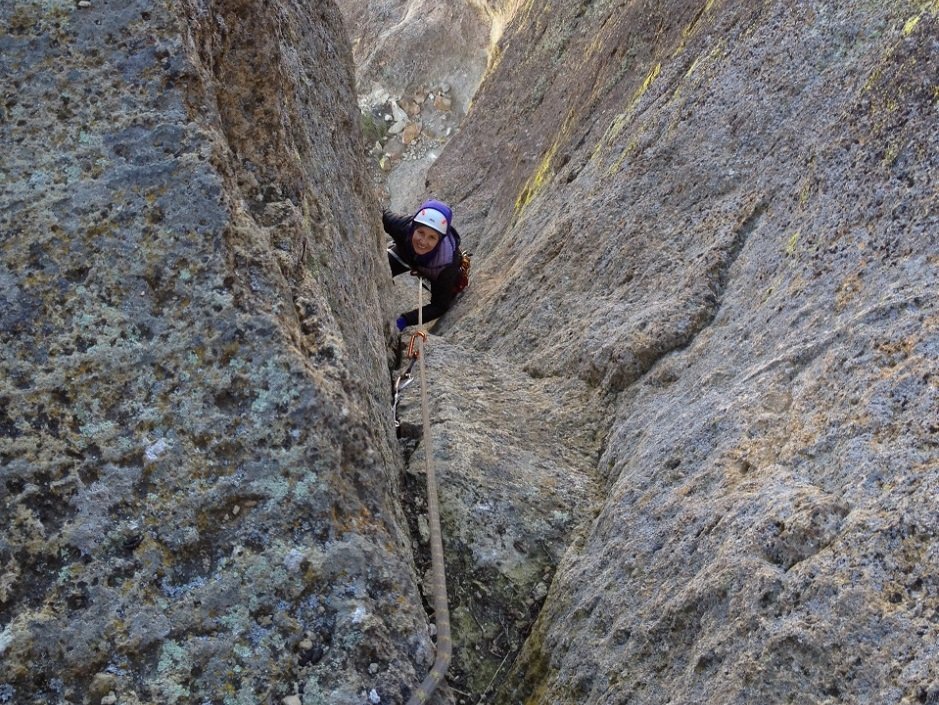 Following up the final dihedral pitch all smiles.

Before we had left our packs to start climbing I made the decision to wait until we returned to our packs to actually propose. This of course left a bit of an irrational fear in my brain that our packs would be stolen with ring and all during our multi-pitch climb, but the real reason was that I didn’t want to scramble anyone’s brains before we made it back down safely off the climb. We made a quick rappel off the back of The Wombat and walked back around to our packs.

At this point I knew I had a keeper. Truly I had known all along but this was the nail in the coffin. She had just suffered through a freezing cold morning after hiking up a shitty loose trail and getting stuck behind a party of three on a five-pitch climb, all the while donning a smile. It wasn’t the craziest adventure of all time that makes this story special. It’s the fact that we could have easily chased sun all day in the inner areas of the park, lounging for the day, climbing routes that came open along the way. Instead, we went for a route that was a little less conventional, things didn’t totally go according to plan, but we made the most of it.

I can pick out my wife’s amazing attributes through countless experiences we’ve had together outside of climbing, but in the context of climbing there are countless others as well:

Final Disclaimer: Climbing with your wife or significant other probably isn’t for everyone. I’d be lying if I didn’t tell you we’ve had our share of testy moments. But in the end I’m lucky enough to have a loving, smart, supportive, and adventurous wife that also happens to like to climb.